“I Have A Whole New Appreciation For My Body” - Alana Blanchard

A few months back, Alana Blanchard and her boyfriend Jack Freestone announced that they were having a baby boy. When the couple went public on Instagram we sat down with Alana and talked about what it meant for her and Jack, for her career, and how she was feeling about it all.

Now, as she gets closer and closer to the nine-month mark, we decided it was time to check in. We talk nerves, excitement and a newfound appreciation for being a woman.

Alana, how are you!? You’re about to have a child!
I know! It’s so crazy. I still can’t believe we’re having a kid.

Everyone is saying that Jack is the most excited person in the world.
Yeah, he’s really excited, it’s so good. He got to come home from Trestles for about six days, and then he’s going to be gone until the Europe leg is finished. I’ll be 38 weeks by then, and the due date is about 40 weeks. We’re so lucky that it’s worked out like this – if the baby was due in October I don’t even know how it would work!

Well, it sure lines up well! And how about the pregnancy? Has it gone about how you thought it would?
You know what, I really did not know how it was going to be – and for me, I am very active and I do love to surf, so I didn’t know what to expect. I was a little nervous. But it’s really been good. I’m a lot mellower and I’m just okay with everything that’s happening. I mean, there are definitely a few days where I’m like, okay, I don’t feel like being pregnant anymore. But it’s actually really surprised me. I feel really good and really healthy, and it kind of opens your eyes to how you see yourself. You’re growing a human. It’s so different than anything you’ve ever experienced.

"My body changed so fast when I got pregnant, and if you’re not okay with the process that’s happening it would be really hard." - Alana Blanchard

I feel like when I got to three months I felt this shift in my mindset, and it was really cool. It’s almost like you become a mom when that happens. And Jack has been really great – we’re really lucky. And overall it’s been awesome. No morning sickness, and there were some days I felt pretty tired, but it’s been so nice to just hang and do our thing.

So, since you announced your pregnancy you’ve been pretty vocal about how it’s changed your body image perception.
It definitely has given me a new perspective on women, and how amazing their bodies are. Even just how hard we all are on ourselves and on our bodies. I was definitely one of those people and I didn’t even know how mean I was to myself. I look back on pictures now and am like, oh my god, I was killing it! Why did I even care?

I’m also surprised that I really like my bump. It makes me feel feminine. And yeah, there are moments where you think, wow I can’t wait to have my body back – but at the same time it’s just such a crazy experience. Women’s bodies are so amazing and we should not have any hate on them, from ourselves or from anyone else, because it’s crazy what we can do.

You have this stomach all of a sudden, and in any other scenario it would be hard to handle a body change like that – but it’s just such an amazing thing, it totally changes your outlook.
Yeah, totally. And it just makes you realise that your body isn’t just there to be used as a way to feel thin, or feel pretty. We don’t need to do that. I think just being healthy and happy and being okay with whatever is happening within us is the best way to go about it. And being pregnant you really have to tap into that. I mean, you do gain weight and you do go through changes. My body changed so fast when I got pregnant, and if you’re not okay with the process that’s happening it would be really hard.

I wasn’t sure how I was going to take it because my whole life I’ve grown up doing photoshoots and all of that stuff, where you get this sense of youth and beauty. But now I’m really proud of my body and I’m so excited. Even when I watch myself surf now I’m like, wow, that’s so beautiful! 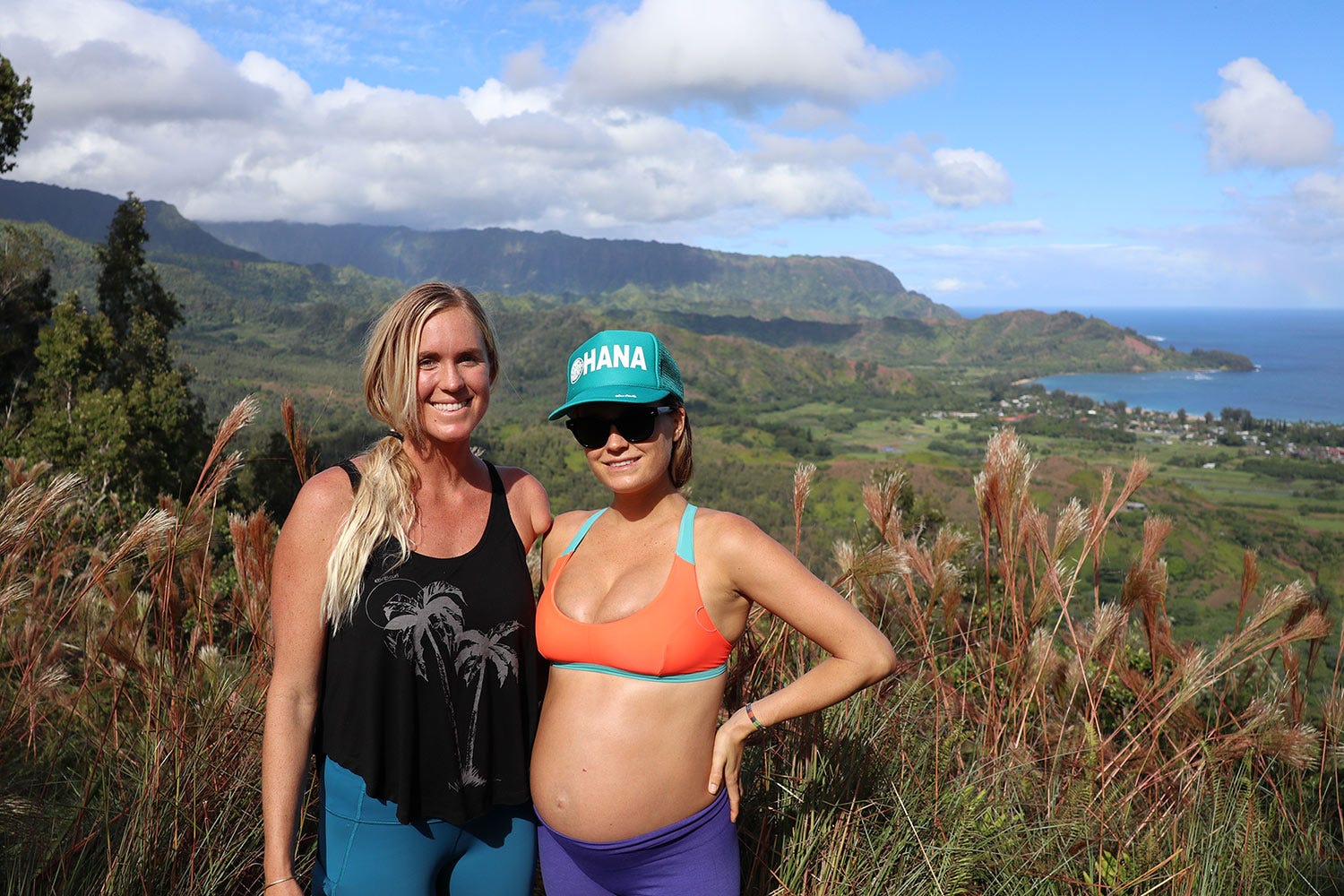 It’s just amazing looking back on how I thought about myself in the past, and how I look at myself now. I’m really thankful. My only thought that I want is my baby to be healthy, and that’s what I’ve been thinking about the whole time.

When you become a mom you realise that all of that other stuff just doesn’t really matter, because at the end of the day if you’re healthy and happy and doing what you want to do, it’s all okay. That little stuff doesn’t matter.

Have you been surfing throughout your pregnancy?
I stopped surfing at about 20 weeks, so just before the four-month mark. I just felt weird about it kind of. Bethany was fine with it – she surfed up to about seven months. But I think it’s how you carry too – I have a short torso so I have a big bump. Bethany has a longer body so she actually didn’t have the biggest bump. I think it’s how you carry and what you feel comfortable doing. I think people have a concept that pregnant people are just these fragile humans, but I feel that we’re actually at our strongest. There are just certain things that might make you feel uncomfortable.

Are you excited to be able to go surfing again?
Oh yeah, I’m so excited. Especially because I stopped travelling about two months ago, and being on Kauai in the summer is a little hard. It’s pretty hot so all you want to do is be in the water, but since you can’t surf you don’t really want to be sitting in the sun. So it’s a little hard, but hopefully I’ll just be able to surf soon after the birth.

And since you haven’t been surfing, how have you been spending your time?
I was doing a few trips, to Mexico for work, to Australia a few times, and a few trips to meet Jack. Since I’ve been home I’ve just been slowing down on things. Now that I’m bigger I do a few walks a day, I listen to podcasts, I’ve just been getting into baby mode – learning about what is to come and trying to be prepared. There is so much to learn. But it’s been fun!

And, are you nervous?
I mean, yeah, I am excited but there is a part of me that’s nervous. You never know what it’s going to be like, and I know that the first few months can be really hard with a new baby. But I have the best support system so I know we’re going to be fine, and I’m open to whatever happens. Everything is going to be really positive, and I’m just going to go with the flow.

Well, can’t wait to meet the little guy! Enjoy the next few months.