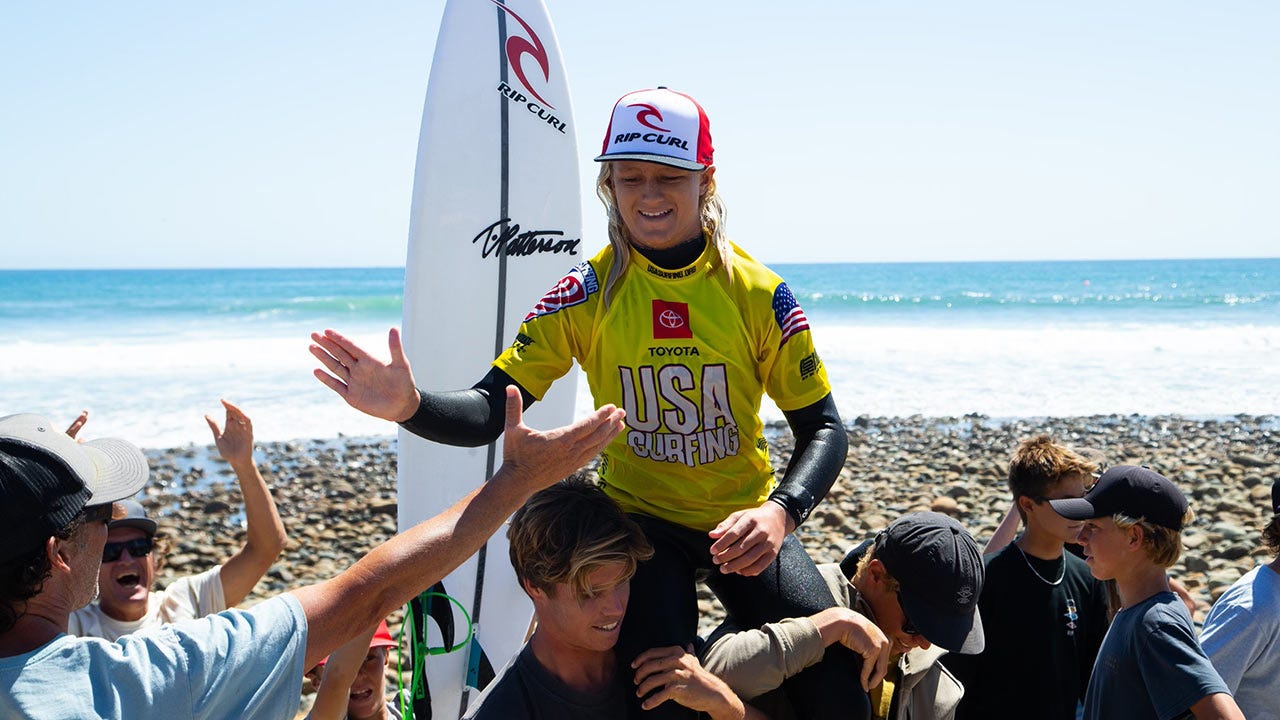 After a week spent on the “right side of the train tracks”, it was clear that the future of junior surfing in America rests in very capable hands.

As a steady stream of groms piloting their e-bikes descended upon the cobblestone skate-park of Lower Trestles last week, so too did a timely burst of southern-hemi energy. Mother nature once again provided the goods for the 2021 Toyota USA Surfing Championship, and the nation’s best and brightest reveled in the rarity of roping walls at Trestles shared with only a handful of their peers in the lineup.

On the girl’s side, Alyssa Spencer made her intentions clear from the early rounds, drawing mature and powerful lines, decimating lips with her signature backhand attack and dropping high scores at will. She appeared poised to add yet another division title to her long list of past achievements, but unfortunately the final didn’t go her way, and she settled for a third place finish in the U18 division behind perennial standout Caitlin Simmers and local favorite Sawyer Lindblad.

The boys side saw multiple buzzer-beater finishes in both the U18 and U14 finals. Rip Curl’s Lucas Cassity Senkbeil had been turning heads in the U14 division all week with flow and polish that far exceeded his years. Splitting his time between Todos Santos, Baja and San Juan Capistrano, CA, Lucas looked right at home in the clean and pumping surf on tap at Lowers, and consistently churned out heat totals north of 16 points throughout the event.

He began the final in the same fashion as in the early rounds, netting a mid-range eight for three big moves on a right. Yet as the clock ticked down, he still found himself trailing San Clemente standout Rex Hennings. In the waning seconds, he found another overhead righthander and laid down one of the most committed frontside hacks of the event, followed by a decimation of the end section. The score didn’t come through until he had his feet set on the shoreline, unsure if he had done enough to snatch the win. The judges sung their praises to the tune of an 8.1, and he earned a hard fought victory at his first ever USA Champs event.

Another team standout was Hawaii’s Ewe Wong, who used beautiful rail-work on the Lowers canvases on route to a semi-final finish in the girls U16 division, stopped short only by an unfortunate early-heat interference that inevitably cost her a finals birth.

Santa Barbara’s Jak Ziets battled through injury to a strong semi-final finish in the boys U16, running into a red hot Shion Crawford (who took the win in U18) and Lucas Owston, the eventual champion of the U16 division.

After a week spent on the “right side of the train tracks”, it was clear that the future of junior surfing in America rests in very capable hands. The standard throughout the event was at an absolutely amazing level, and it was a treat to witness the nation’s best talents on display. Congratulations to all finalists and champions, we already can’t wait for next year!