While the company started in 1969 as outlined previously, the name "Rip Curl" actually came about in 1967. 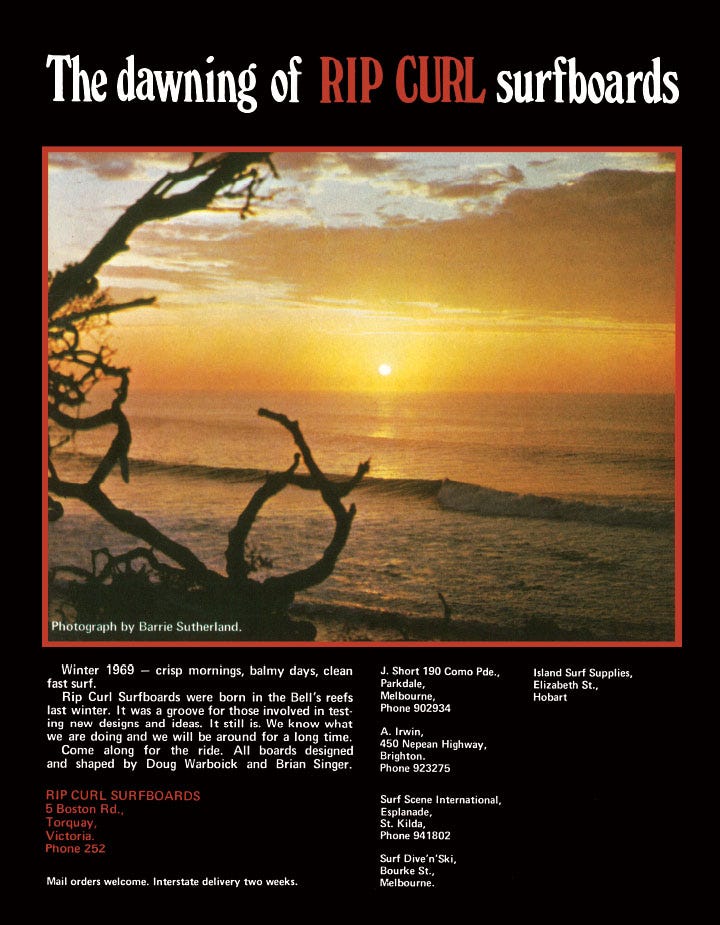 The First Rip Curl Advertisement: Brian and Claw thought for hours over its composition for weeks before it was eventually published

Claw and Brian were agents for Danny Keyo at the time selling the Bob McTavish designed "Fantastic Plastic Machine" out of the Bells Beach Surf Shop situated on the side of the old BP Garage in Bell Street. The shop was owned by Brian, Claw and Terry Wall and they were front and centre during the shortboard revolution of the time.

The Plastic Machine was a hit and they had a lot of orders. Demand was high, and supply short, so the pair thought they would do a model of their own and get them made elsewhere. They contacted Shane Stedman in Brookvale, who jumped on the plan. "I can make those boards," Shane told them "But you have to give us a name to sell them under."

One afternoon down in the shop, Claw and Brian and another local surfer, Simon Buttonshaw, were sitting around tossing up names for the board.

"I had a McTavish Plastic Machine before that day and Simon had previously painted the words ‘Rip Curl Hot Dog’ on it and I liked the name a lot," Claw recounts. Somewhere in the mix that afternoon, and in the ensuing discussion around names and surfing vocabulary, the winning combination of "Rip Curl" bubbled to the surface and became the name of the board model.

It was good. Real good. And it stuck again when they began the company later in April of 1969.