Benji Brand received a personal invitation from Mick Fanning to compete in the 2019 Rip Curl Cup at Padang Padang. And on the best day of the year thus far at The Balinese Pipeline, Brand did not disappoint. 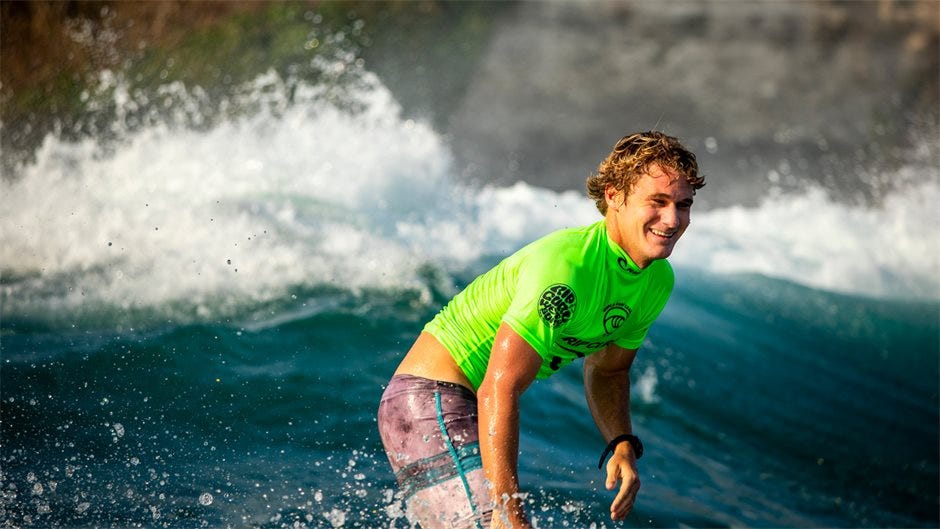 In grinding 6 to 8-foot Padang Padang barrels, the rapidly ascending 23-year-old South African who cut his teeth growing up on the North Shore of Oahu, topped a field of 16 of the world’s best tuberiders with an electric all-day performance to claim The Cup.

“I was so surprised when I heard that Mick had invited me to compete in this event,” Brand said after being soaked with champagne by his fellow tube hounds on the winner’s podium. “I’ve watched so many of my heroes compete out here in past years. To be recognized by them is the best prize. The all-day Padang barrels with only a couple friends out doesn’t hurt too.”

With under four minutes remaining in the Championship Final, Brand was sitting in second place behind Clay Marzo (HAW) and needing an 8.84. Brand clawed to the bottom of the thickest wave of the day and sealed the deal with a double spitter across the reef for a 9.67. In the end, Brand was hoisted to victory in front of a raucous crowd, followed by Marzo in second place, former WSL World No. 1 Matt Wilkinson in third place, and the lone local Indonesian surfer to reach the Final, Raditya Rondi, in fourth.

It was validation for Brand, who may have still been an underground name to some surfing fans, but not to three-time WSL World Champion Mick Fanning, who was given the honor of inviting the four surfers he most wanted to see compete in the Ultimate Tuberiding Contest.

“Benji is a kid who is an incredible tube rider,” Fanning said when he announced his selection of Brand. “I’d love to see him at Padang taking it to the boys.”

Taking it to the boys is exactly what Brand did. On his run to the title, Brand scored countless amazingly deep tubes, including a 9.67 and 9.5, the two highest wave scores on the day. At the outset, Brand and Marzo looked like the surfers to beat in the event. Brand dominated the morning heats, winning both his Round 1 and 2 heats and posting the highest combined heat total of the opening two rounds.

Marzo meanwhile put together a spectacular performance, capping off multiple deep frontside drainers, including an insane layback in which he did a full horizontal limbo lean on his back foot, pointed up to the sky, and somehow emerged from a deep the spitting inside bowl, amazing the massive crowd on hand at Padang Padang and watching on the webcast.

“This was my second time surfing in the Rip Curl Cup at Padang,” Marzo said, who also reached the Finals in 2016 and place fourth.

“I don’t do contests, but I always hope I can get an invitation to return to this event. I can’t tell you how much fun we all had out there today.”

It certainly was another epic showcase for the Rip Curl Cup Padang Padang, including eight incredible barrel rides scoring in the excellent 9-point range. It was an iconic performance by the brotherhood of the world’s elite barrel riders – a brotherhood Benji Brand is now undoubtedly a member of.

“Today was a dream come true,” Brand said, after being chaired up the beach by his good friends from his adopted North Shore home. “The swell was still pumping on dark. Let’s do it again tomorrow!”