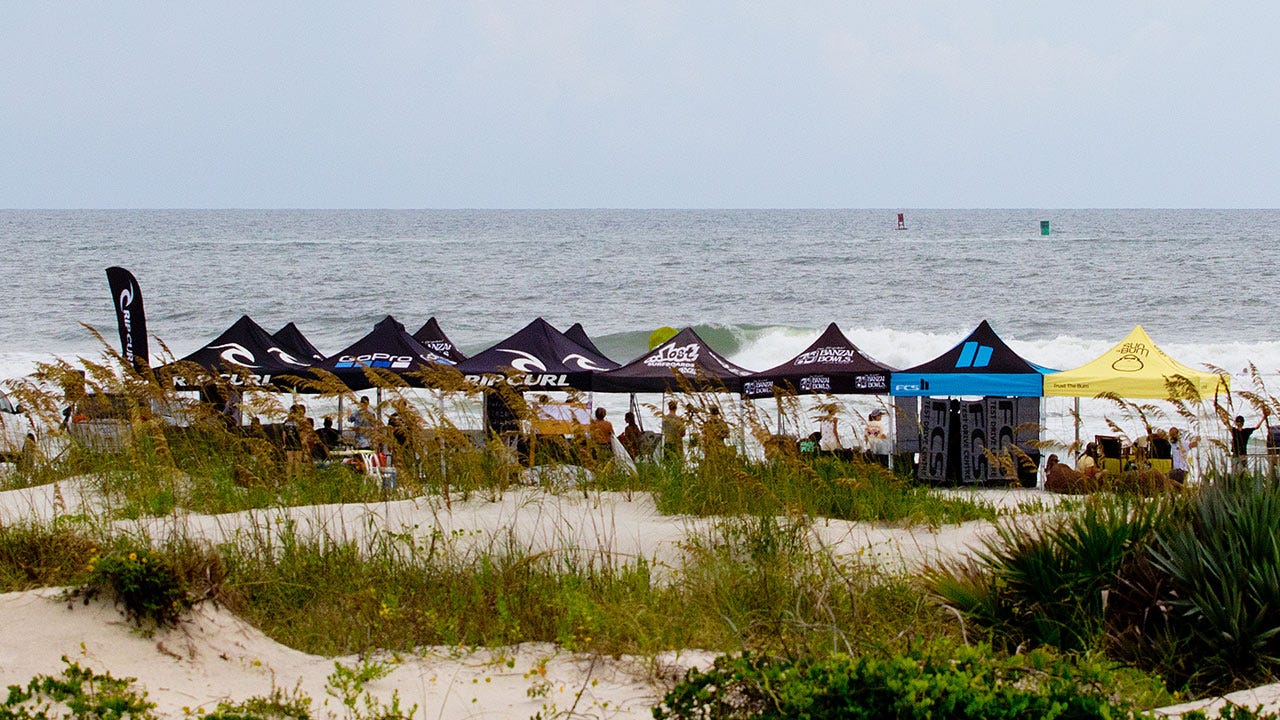 The Rip Curl GromSearch presented by Banzai Bowls East Coast Qualifier, held at NSB Inlet, FL was treated to a gorgeous weekend of weather, paired with fun and punchy peaks, perfect for the high-performance approach brought on by some of the nation’s top junior surfers.

The aptly dubbed “Sunshine State” lived up to its moniker over the weekend, as competitors and beach goers alike made their way on beach-roads towards the jetty. The Rip Curl GromSearch presented by Banzai Bowls East Coast Qualifier, held at NSB Inlet, FL was treated to a gorgeous weekend of weather, paired with fun and punchy peaks, perfect for the high-performance approach brought on by some of the nation’s top junior surfers. The thunder and rain threatened at times on Saturday but with an ample margin as they made their way northwards. Even the often-plentiful grey-suited locals remained at bay, and we didn’t spot a single shark over the weekend either (but perhaps just weren’t looking hard enough).

Getting the event underway were the 12/U boys, and Rip Curl team riders Petey Romanuik and Lucas Cassity Senkbeil started strong, both dropping 8-plus point rides in their opening heats and throwing their hats in the ring for the “…Lost High Heat Total award”, and the free custom Mayhem surfboard up for grabs. It was Petey though who narrowly edged him out and walked away from the first round holding the highest total. They kept their momentum going through the following rounds and found their way into the final alongside Vance Weyandt and Luke Lopez, the offspring of one of Florida’s finest, former-pro Cory Lopez.

Vance found an early left (as the final ran an hour ahead of schedule to allow Vance time to dash to his impending flight) and went vertical twice for a mid-range seven. The following minutes didn’t offer a whole lot of scoring potential, and the others struggled to find anything of consequence. Weyandt held on for the win, taking his trophy, bounty of prizing and scrambled for the airport after a job well done.

Sandwiched between the 12/U and 14/U division finals, six lucky winners of the randomly selected Softech Expression Session went out on Mason Ho Twin model Softech Surfboards for a winner-take-all fun fest. Owen Carter lit up a right-hander early on, but after looking poised to walk away with a brand new Softech as a prize, it was the creative and well-rounded approach of Bryse Celaya that took victory and added a fresh sled to his quiver.

The 14/U boys began with a Californian super-heat, and we saw Rex Hennings emerge victorious over longtime friend and momentary foe Charlie Stevens. Benji Lang, Logan Radd, Will Deane and Braeden Kopec (who jumped into the high heat total lead) were also early round standouts. They kept the ball rolling through into the semis, but after Braeden and Logan bowed it, it was Petey Romanuik who jumped into his second final of the day, joining Benji, Will and Rex. With the even split of East and West coast representation, Petey wasted no time in making his intentions clear, and proved to be too much for the others to contend with, snatching the win in the 14/U division with big open-faced hooks and his patented layback snap, honed on countless Huntington Beach end sections.

The 16/U girls crown up for grabs appeared to be a battle between Zoe Benedetto and Kylie Pulcini from the event’s onset, and after both emerging from a head-to-head quarterfinal clash, they found their way into the final alongside Nora Liotta and Lanea Mons. Zoe opened with a couple of searing cutbacks on a double up right, and Kylie and Nora both fought to keep pace early. In the waning moments after Nora secured the score she was looking for, it was Zoe’s turn to play catch-up. She had an opportunity to do so, but in the end the effort fell short, and when the Floridian dust settled it was Nora who walked away the champion, $500 dollars richer for her weekend accomplishments.

Last but certainly not least, the 16/U boys division flared up in the skatepark-like conditions on offer at Smyrna, and suddenly the Banzai Bowls Maneuver of the event seemed to be the talking point on everyone’s mind. Carl Burger whipped a frontside air, Ryan Huckabee delivered as his namesake suggests, throwing his tail into the prevailing southerly winds, but it was an earth-shattering frontside re-entry from Braeden Kopec that took the cake, earning him $400 cash (served in two-dollar bills) in the beautiful, handcrafted trophy by San Clemente local artist Jeff Lukasik.

Braeden didn’t slow down, and in the stacked final with Burger, Huckabee, and double division finalist Benji Lang, he managed to take yet another GromSearch win, following his 14/U division title at the season opening Huntington Beach event.

We’d like to give a massive shout out to everyone in New Smyrna that made this event possible, and it truly was a pleasure to be back on the right coast after a long, Covid-induced hiatus. We’d like to thank Banzai Bowls, Flexfit, Go Pro, Sun Bum, FCS, Softech, Lost Wahoos for our 2021 GromSearch season would not be possible without the tremendous support of these sponsors.