It’s All About Perspective

Join Brisa Hennessy behind the scenes of her new film, as she talks about harnessing the power of fear and the perspective shift that was 2020.

In March of 2020, when the world began to sink into lockdown, Brisa Hennessy and her family made a bold move. Nomadic by nature they jumped on a plane to a remote island in Fiji, Namotu, where the family live and manage a resort for parts of the year. 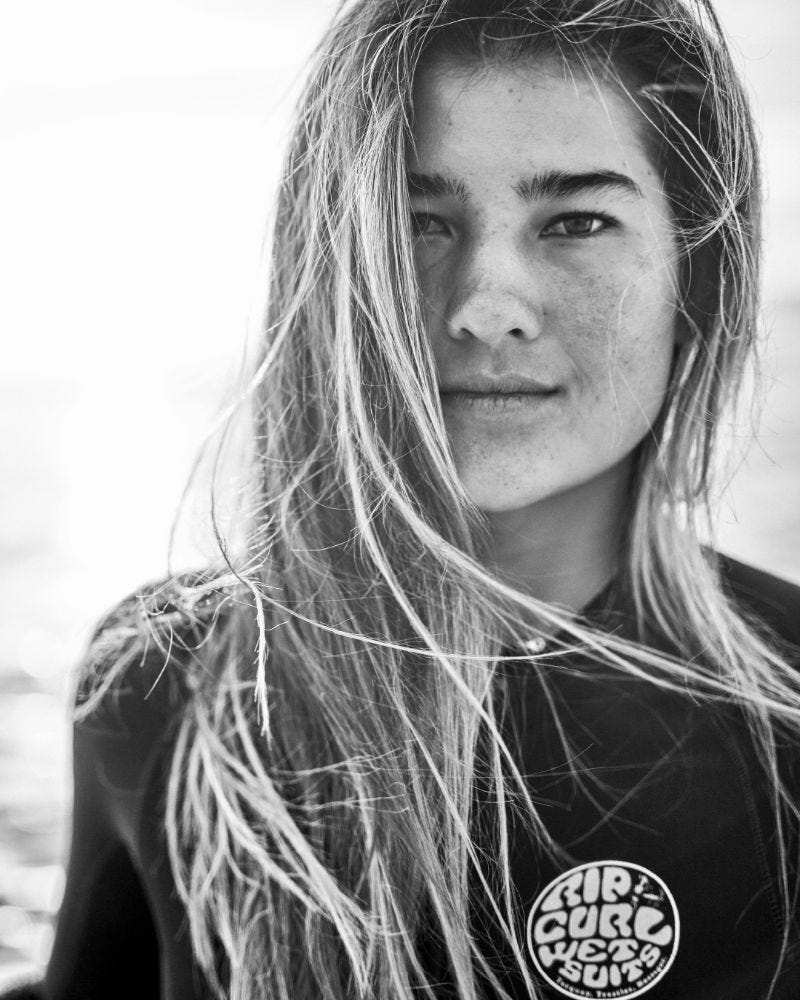 Brisa, her mom and her dad arrived on the island with no concept of how long they would be there, or what the world would look like when they eventually left the one mile stretch of sand. In the end they spent nine months isolated on the island with a handful of local Fijians, working together to ensure there was enough food and supplies to make it through. “Yeah, we spent nine months in Fiji,” says Brisa. “And that’s so weird to say, because that’s a long time to be on a one-mile island. I can’t tell you how many times I ran around the perimeter just trying to get some type of different exercise.”

2020 was all about adapting, and Brisa’s time in Fiji was no different. After finishing her rookie year on Tour in 2019, she was more fired up than ever to get back into competition and take on the year ahead. But of course, the world had different plans. “I had this different type of motivation and drive, I was so excited to compete and get redemption for my rookie year. Then all of a sudden we were sitting on the beach, alone, trying to process what was about to unfold. That’s one of the scary parts of being a human, we tend to not be able to sit in the present moment, instead we look to the future and feel fear about what might be.”

When Brisa, her mom and her dad arrived on the island, the local Fijians living there were unaware of the pandemic unfolding around them. Over the coming months many Namotu staff travelled home to their families on the mainland, and towards the end of the year only a few locals remained. “The Fijians that we spent those nine months with, they are such a testament to an incredible human life. I’ve never had the opportunity to sit down and really hear their stories and backgrounds and connects on a deeper level, and then all of a sudden we had nine months to do it. The friendships we made were so amazing.

“The best moment of our entire time on the island was when we took everyone surfing. A lot of the locals don’t know how to swim, no less ride a surfboard. It was this crazy experience of seeing a whole evolution of surfing. I forgot what it felt like, that feeling when you first stand up on a board – I got to witness and be a part of that whole process. Standing up, looking at a wave for the first time. It was so refreshing and inspiring and it made me connect back to why I do what I do. The locals ended up wanting to go surfing every single day, they were hooked.”

Surfing can be a very powerful thing. It can bring people together. It can inspire people, and motivate them. And it can act as an agent of change, breaking boundaries in the water and also in life. During her time in Fiji, Brisa had the opportunity to witness this first-hand when she went surfing with a local female surf club.

“I went surfing one day and ran into some local girls in the water, they were charging and I was absolutely blown away. I reached out to them and asked if we could surf together again, because I’d never seen this next generation of women in Fiji. There is a big push of Fijian men surfing Cloudbreak and charging, but women haven’t really had the growth and support for surfing in Fiji just yet.

“I visited their local break and we surfed and talked story. I met up with three sisters, and it was incredible to hear that their mom was one of the first female surfers in Fiji, and they were carrying her passion into the next generation. There are a bunch of little girls that are a part of this surf club, and to witness these young women out there inspiring other girls to go surfing was amazing. The water is a place that’s known to be scary, and a lot of the girls say that it is an unsafe place where they sometimes don’t belong. But just being out there, having the opportunity to be in the water, it’s so healing and it can really reinforce positivity and confidence and growth in someone’s life.”

That principle holds true for surfing, no matter your age, background, ethnicity or gender. Time in the water changes life on land. For Brisa, the biggest change came during a session at huge Cloudbreak where she learnt to accept fear – and rather than run away from it, she harnessed it.

“At a certain point during 2020, I started going out to Cloudbreak. At first I tried to just focus on not going over the falls, then over time I’d just work through sessions focusing on different things. One session, the one you see in my new film Perspective, was big. And honestly, I was really scared. I had to go into this different mode of embracing the fear that I had, and rather than looking past It I had to accept it. Learning to do that allowed me to grow and be in that present moment, and not think too much about the future.

“You really need to listen to your instincts when you’re out there, because it’s unpredictable and raw and it’s in the middle of the ocean. When you’re out there, you have no idea what is coming. That wisdom, that stillness and acceptance and presence, it was really helpful to me. Fear is uncomfortable; but I learnt [at Cloudbreak] that when you accept that it’s real, it’s there, you’re willing to embrace it. You either stay uncomfortable or you grow.”

For Brisa, learning to confront her fears took her back on a path of reflection, back to her first year on the World Tour. In her new film Perspective she talks about fears from 2019 and the impact they had on her life. “I had a lot of fear in my rookie year… fear that I wasn’t staying true to myself. At that point in my life I spent so much time comparing myself to others and not embracing who I am, the journey that I am on. It was really hard. Everyone is on their own path and in my rookie year I fell off that path, I was a little lost in who I was.

“I think that’s the biggest thing, being a human being. We tend to let our ego get in the way and we leave the present moment, what’s at hand, what we can learn from the here and now. We think way too much about the future, and that’s what Cloudbreak brought to light to me. I know what I need to work on, and I need to embrace it and continue being true to that.”

As a competitive surfer Brisa’s drive and passion is to win events, but for her, the feeling she got from overcoming her fears at Cloudbreak was incomparable. “Overcoming that fear and obstacle in my life was an insane feeling. I’m still in the process of trying to conquer those fears, and I think it will be a never ending battle with myself, but it’s so big. Facing these types of things, it’s about finding who you are.

“For me, the ocean is somewhere that I can do that, that I connect with. It’s constantly changing, it can be scary and angry and beautiful. It mirrors who we are as humans, our emotions change and we are all so different, constantly changing. I think that’s why I connect with Cloudbreak and with the ocean, because it is ever-changing – and we have the power to be like that too. Somehow though, the ocean always seems to go back to being beautiful and still, that stillness is always there.” 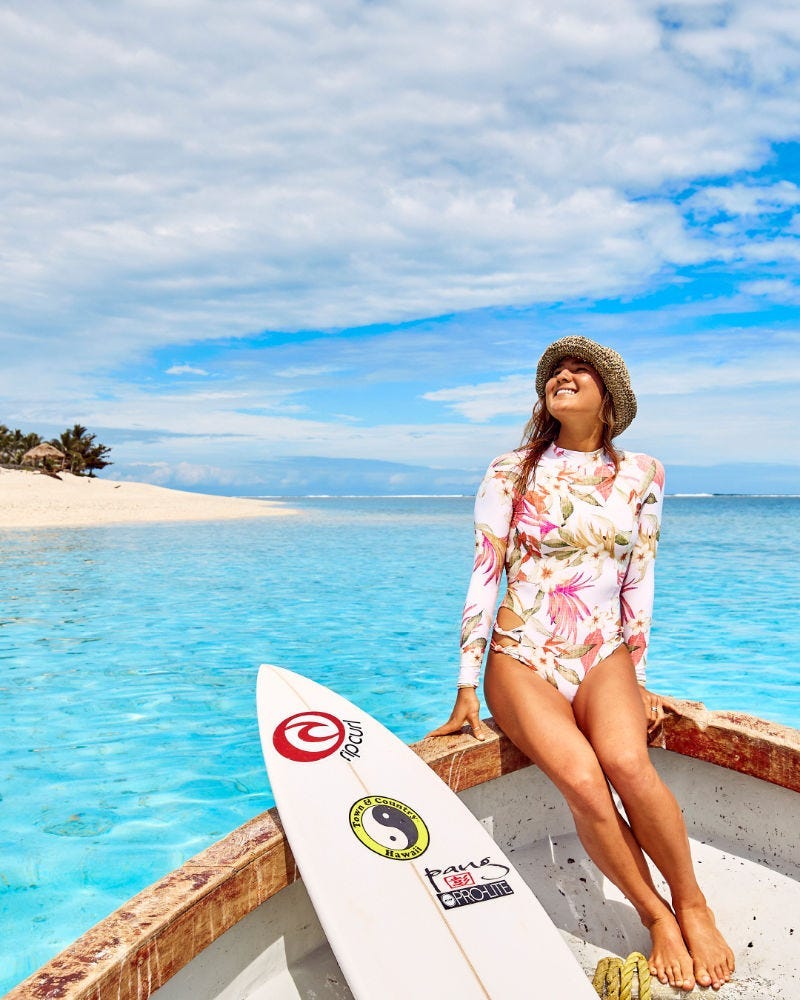