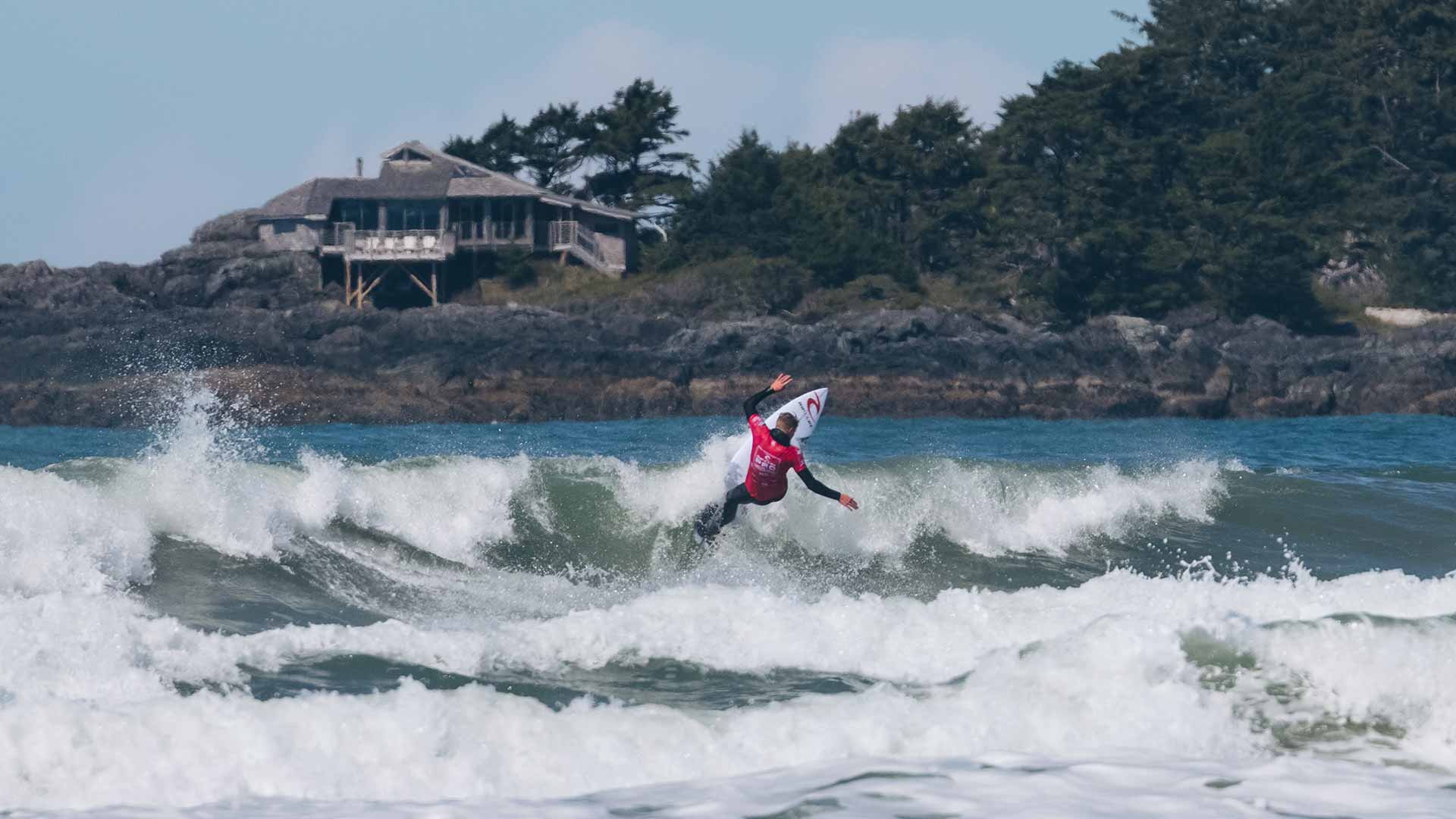 Despite nature’s sincere attempts to throw a spanner in the works early on, the 2022 Rip Curl Pro Nationals concluded in splendid conditions on Sunday.

The best was most certainly saved for last national champions were crowned at Cox Bay, Tofino, Canada.

As dawn broke on day one, it was quickly apparent that the weather would be too stormy and challenging to run heats, so for the first time throughout the storied 15 years of the event’s history, the contest was called off for the day and event staff were forced to regroup for a huge day of competition at North Chesterman Beach on the following Saturday.

Utilizing both a north and south podium setup, the call to run double-areas paid dividends, and we saw a far less breezy day of nail-biting early round action. There were hotly contested heats from the get-go, and the U16 and U18 boys and girls bookended the day with more amazing exchanges in the day’s final matchups.

Tofino locals and Rip Curl teammates Shea Bruhwiler and Reed Platenius started strong and never looked back, winning their opening round heats and marching through the competition on finals day to claim the U16 and U18 crowns, respectively. While Reed was dominant from start to finish in the U18 final, Shea’s matchup was a seesaw battle between he and Kanoa Palmiano. Shea held the lead for much of the heat, but Kanoa snatched it in the waning minutes with a huge backhand re-entry. In last seconds of the final, Shea found a right and laid down two big backhand tags of his own, earning a 6.50 and securing the title.

On the girl’s side, it was younger sister Chloe Platenius continuing the family domination and taking home the U16 girls final over Ocea Greene in second. The victory marked Chloe’s first ever Rip Curl Pro Nationals title.

In the U18 girl’s division, Sanoa Olin put forth a strong performance and took the win from fellow Tofino residents Jasmine Porter, Ocea Green, and Aqua Bruhwiler. The final stayed tight within the opening half, but on her fourth and final wave of the heat, Sanoa dropped the strongest score of the final, a 6.43, and put the heat out of reach.

The wind gently retreated throughout the day, the clean, light-offshore breeze a far cry from the opening gusts that gripped the event’s infancy, and the highly anticipated Pro division finals held the crowd’s attention against the glowing sun. Coupled with the dusting of snow that fell on the second day, it made for a uniquely “Canadian” contest experience, housing a little bit of everything in the weather department.

Sanoa, the younger of the sisters Olin, opened the final with a strong wave and raced out to an early lead. It was short lived, however, as Mathea was determinedly steadfast in looking to defend her 2021 Rip Curl Pro Nationals title. She utilized the entirety of the Cox Bay contest bank, snatching scores in the 7-point range on both a righthander and a lefthander, and proved too much for runner-up Sanoa to match yet again. Rounding out the Women’s Pro final were Jasmine Porter and young upstart Ocea Green, who clung to third place until late in the heat when Porter leap-frogged her with a late charge.

The Men’s Pro final started a bit sleepily with a lull in the relatively consistent west swell that hung through final’s day, and the 25-minute heat wound up playing out more like the typical 20-minute stanzas afterall. Following a relatively even, mid-range exchange between all four athletes, it was Rip Curl’s Noah Cohen who found the first big number, a 7.50, and grabbed command of the championship round. With the incoming tide and fading swell, the challenge at Cox was certainly finding a wave that stood up and offered a vertical canvas out the back, before easing into the gutter and eventually reforming on the inside. Again, it was Cohen who managed to find another steep left and bolstered his lead with a mid-range six. Reed Platenius followed suit with one of his own, and it looked for a time like Rip Curl would finish 1 and 2 atop the podium, but a late left from Californian resident Wheeler Hasburgh saw him snatch silver from Reed just before the time ran down. Tofino’s Michael Darling settled for fourth place, after his exciting, go-for-broke approach to the final yielded a couple of near misses from giant numbers.

As the sunlight faded from Tofino’s horizon, celebratory showers of Heineken 0.0 drenched delighted finalists, and another amazing Rip Curl Pro Nationals had come to a close.

We would like to thank CSA Surf Canada for an amazing event amidst challenging weather, and the District of Tofino for their continued support and allowing the permitting pivot to run at North Chestermans on a moment’s notice, along with all of the other event partners who made it another for the books!