Tom Curren disappears deep down the rabbit hole in Mexico.

Rip Curl HQ, Torquay, Australia: In early 2020 when the world was locking down in the beginnings of the Covid-19 pandemic Rip Curl got word from Tom Curren @curfuffle that he was heading to Mexico with old friend Buggs Arico to surf and avoid the carnage which was unfolding across the USA. Disease, riots, protest – a hot bed of change, emotion and confusion. As usual, Tom took to the ocean as a way of making sense of it.

We weren’t quite sure where it would lead. Soon after they let us know that photographer @andypotts would be heading down there too and that he would shoot whatever happens over a 6 week period – although it could have been longer – as no one was really counting as the waves blurred into the days and the days blurred into the waves.

Buggs has the Punta Conejo Resort south of the border @puntaconejoresort and it would prove a fantastic bolt hole to hide out: surfing and making music as time spun into a world of whatever for the trio.

Over the period Rip Curl had sporadic contact with the crew, sometimes from Andy trying to get home and back to Australia and back to the USA (that’s another story for another time), other times from Tom himself to wish us all well when things looked uncertain and to talk surf.

We know Tom worked on boards a lot, fin design, switching between a new Channel Islands twin fin model and his skimboard spacecraft quiver using the long right points as a laboratory for flow. He also played a lot of music, much of which appears in the film.

The keyboard solo “Buggsy’s Nose Ding Lament” is a classic; and he scored the “Free Scrubber Theme” a jazz, fusion, electro track under the big day of waves at the end of the film when he got back to the USA. Songs which echo in your head when surfing after watching the film. Other artists Israeli Chicks, Mylee Grace and the Goons of Doom fit perfectly in the mix.

The resulting movie “Free Scrubber” – which was put together by @vaughandeadly and @nickpollet – pulls it all together in a way no one could have expected. Speaking with Andy it became clear that the story of their time could not be told in a documentary or linear way. It was just too much to expect, too hard to explain “if you weren’t there you would never know”. So with his blessing we took the footage and gave it to the boys to create “Free Scrubber” part surf film, part wanged-out comedy, part buddy movie, part Search trip all rolled into one.

The only mandate was make the intro explode the myth, show the sense of fun and irreverence in Tom and don’t cut any waves up – let the surfing flow from start to finish – Andy’s world class drone footage highlighting Tom’s approach. So we sent ‘em two hard drives worth of content and said “Go for it…”

Hot on the heels of our 2020 collaboration on “Postcards From Morgan”, we hope you enjoy it.

Firstly, it just lets him surf. You don’t tamper with the genius of the man and his surfboard. Just put him on a righthand point, roll the tape and get out of the way. Secondly, it needs to stop searching for him. For decades now filmmakers (and everybody else) have tried to paint some kind of definitive picture of Curren, the man, the surfer… and Curren has defied them at every turn. He now appears to be toying with them, creating a caricature of himself. He can’t be found, he can’t be interviewed, or he turns up on a smoking day riding a backyard skimboard held together by gaff tape. The metaphorical Search for Tom Curren is today a waste of time. He clearly doesn’t want to be found. There is however a loophole here. If you don’t set out to look for him, then maybe – just maybe – you might just get a glimpse of the man. The best way to find Tom Curren is not to look for him. This brings us to Mexico, last year.

With the pandemic roaring through California, Curren bailed south to Salina Cruz with long-time buddy, Buggs Arico who owns a joint down there. Soon after they arrived, the Mexican border closed and the local Federales cleared all the surfing gringos out of town… except for Tom and Buggs. They stayed for three months down there, on their own, the only surfers in town and with the point at Salina Cruz to themselves. Tagging along on the trip was Australian filmer, Andy Potts who had his cameras, but no real plan. A closed, three-month shoot with Tom Curren on a Mexican sand point however was too good an opportunity to miss. The cameras rolled.

Later in the year, two unmarked hard drives turned up in the mail at Rip Curl and were passed to filmmaker Vaughan Blakey. The footage from Mexico bent his brain. His first thoughts were to do nothing; just run it as it was. “You could have just run the raw footage and it would have been all-time,” he said. “With Curren it would have made perfect sense.” Instead, Blakey took on the daunting task of editing a Tom Curren film, a task made even more daunting by the fact he’d never actually met Curren. “The weirdest thing with me and Curren is that, after 25 years of working on surf mags, of all people in surfing there are two guys I’ve never met – Ross Clarke-Jones and Tom Curren. When I started working at Waves, Curren was already off making Litmus with Ank and Frank. He’d already disappeared.”

The fact that movies like Litmus and Searching For Tom Curren – filmed at the point when Curren departed the scene in the ‘90s and was at his most influential – have become cult classics weighed heavy. These early renderings of Curren and his surfing built a reverent, enigmatic picture of the man. Vaughan Blakey however doesn’t make those kind of movies. His surf films have been goofing it up since Kelly Slater was Groovy Avalon, and he’s become the master of the mongo-fun surf edit. So what to do with this? A Curren comedy? Curren can be hilariously funny, but his humour is so deadpan and high concept that it’s almost impossible to detect in real life, let alone capture on film. Andy’s footage was a mix of surf action and strange cinema verité scenes as Tom squirrels away on surfboards he’s modified from spare parts lying around. Typical Tom though. If the camera came out he’d stop whatever he was doing. Andy had to steal moments, but over the course of three months the camera became less intrusive, and Curren went about daily life as if unobserved. Under a white-hot Mexican sun, things got both brilliant and weird. 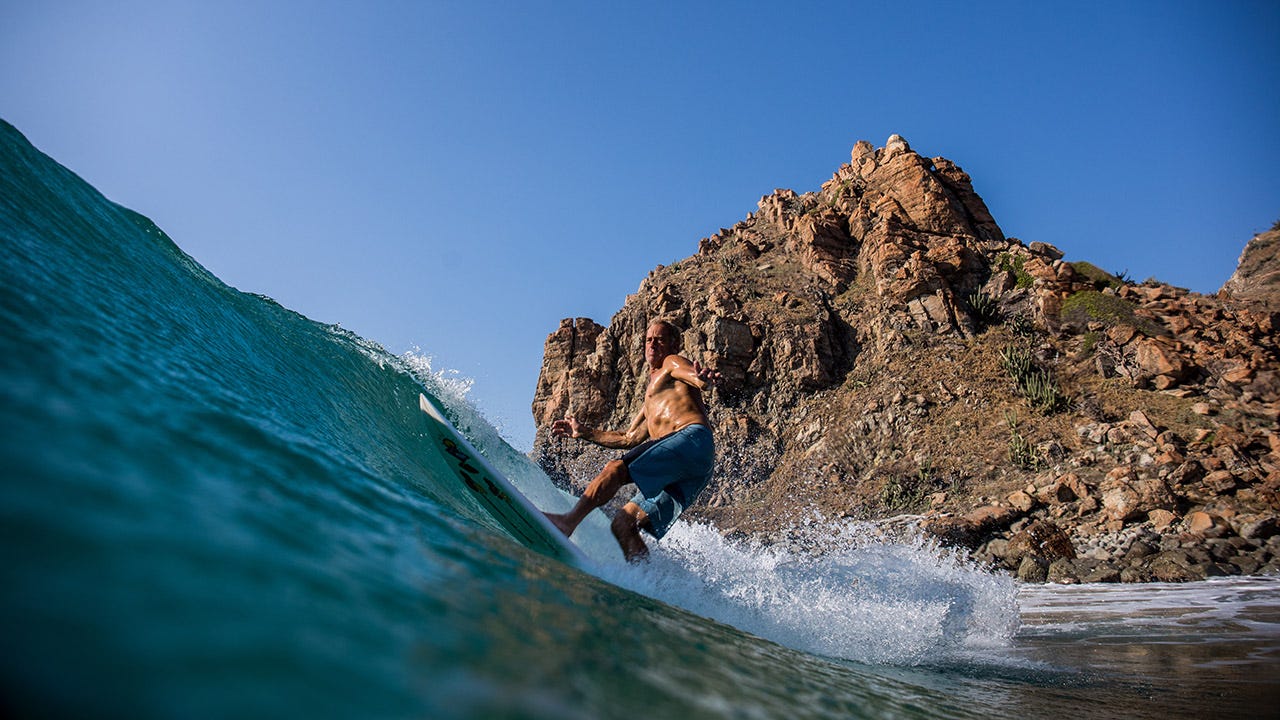 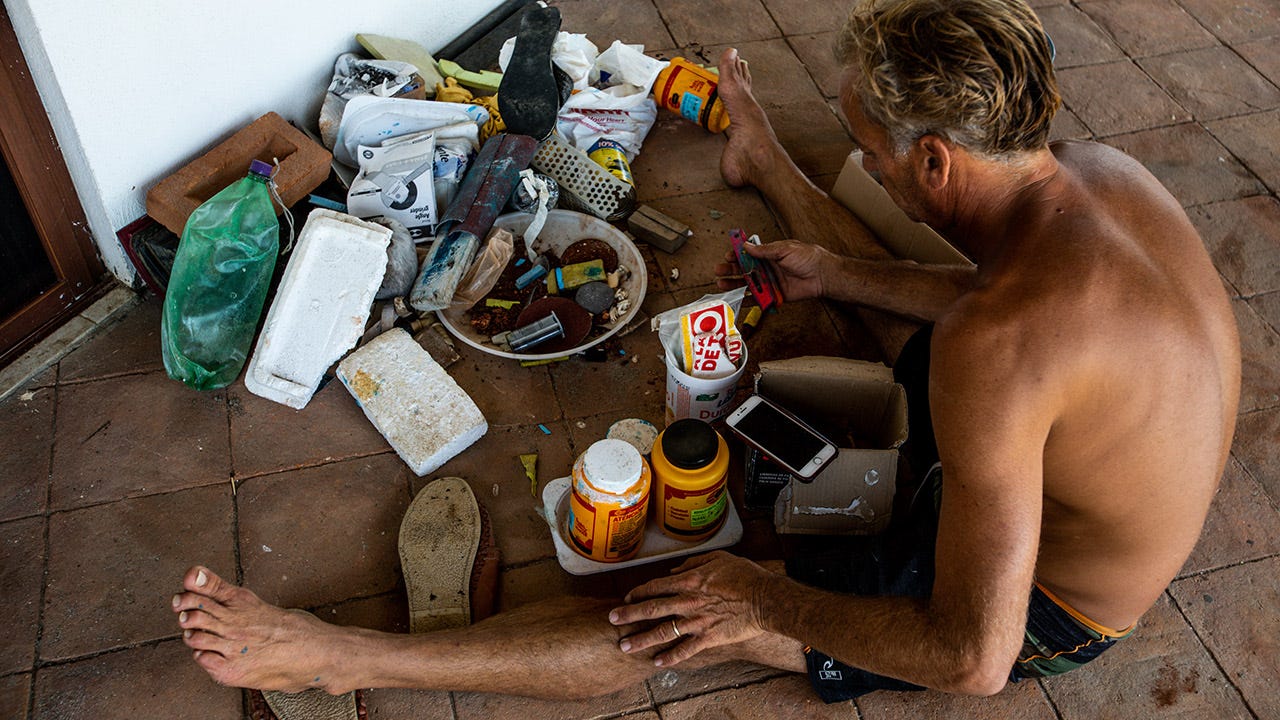 Charged with making something from the footage, Blakey could make another serious Curren film, or he could go down the rabbit hole alongside Curren and make something clock-meltingly brilliant. Just embrace the glorious strangeness of it all. This was Free Scrubber. “When I was watching the footage, it was just so fruity. Everything in there that felt like a David Lynch sidebar. This is like David Lynch, mate. But at the same time, I don’t know, it was also a great buddy comedy like The Blues Brothers or something with Tom and Buggs. It’s like this odd couple thrown into isolation and everything they’re doing is just wacky. It was completely hilarious.” 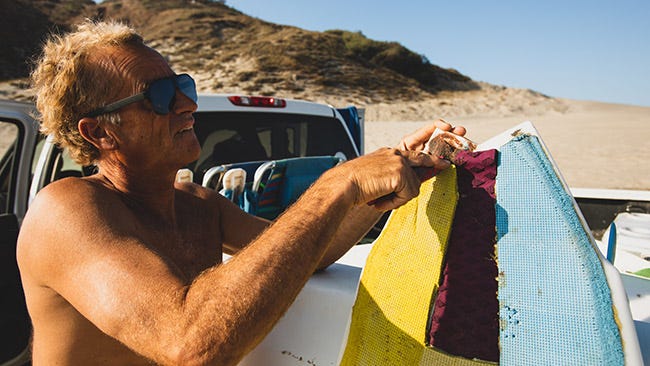 Blakey got license to get weird from the man himself. “Curren and I only spoke twice on the phone about the film,” says Vaughano. “That was our only contact before we started cutting it. I said to him, ‘Look, man, I’m going pretty out there on this one.’ And he was going, ‘Bend it.’ That was his advice to me, ‘Bend it.’ And I was going, ‘Oh, it’s bent, mate. It’s bent. It’s so bent it can see the back of its own head!” That was the last Blakey heard from Curren. Four text messages, two conversations, no response and no review of the finished edit was the sum total of correspondence. But Blakey ran with it and soon Joe Turpel was commentating Tom’s waves, unexplained faces were appearing for no reason, and Tom Curren was hula-hooping. Free Scrubber fell somewhere between Searching For Tom Curren and Erasherhead.

But like a Lynch film, there was also an unsettling vibe to it. The whole scene in Salina Cruz was already a little unsettling. For starters, the surf town was empty. The pandemic had cleaned all gringos out. There was also some bad juju with the locals, who were a bit on edge about them being there. But the unsettling nature of the edit comes largely from not knowing what the hell is actually going on. “I was watching it,” recalls Vaughano, “just going, imagine walking in on this scene. What is actually happening here? Would you find it funny? Would you be buzzing, or would you be going, ‘Holy shit, this is actually a little disturbing’? You just don’t know what’s actually going on.”

"Holy shit, this is actually a little disturbing? You just don’t know what’s actually going on.”

The edited result was right on the edge. “And that’s what I felt like I was watching the whole time. What the hell is going on here? What’s happening here? And it just had this great sort of balance of being really funny, but really out there at the same time.” Blakey twigged on what he needed to do. A great Curren edit needs to pose more questions about Curren than it answers.

The surfing in the film, however, spoke truth. “The waves he’s surfing are just these beautiful, playful little right points and his surfing... I reckon there’s turns in there that look identical, in zappiness and zippiness and positioning and just light-footed fun to some of the turns he was doing when he was young. He’s just so green-limbed, it’s amazing. You look at Curren and you can see it. You can see a pathway to a bright surfing future if you’re north of 40. Whereas with Kelly… no one can really relate to it. It’s almost like, ‘Why do you want to try that hard?’ But Curren’s surfing, for all the rest of us, it’s just like, ‘Yes.’ It’s a license to not try too hard. You can get on a wave and stand there and just enjoy the glide and make it look like the most natural thing on earth.”